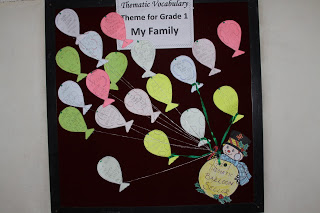 “Word power is the key to effective communication”

Keeping in mind the above mentioned secret of English Language Improvement ‘Thematic Display Board Activity’ has been successfully conducted by the English Teachers of Std. 1st to 5th as a part of English week celebration. (4th July to 9thJuly)

The very first day of the week, different riddles and crossword puzzles were displayed along with pieces of papers to write answers as well as the boxes to drop their answers in. That day the board was looking like a bee hive surrounded by several honeybees.

The next day, the five boards were allotted to respective classes for a given theme. All the boards were entitled by different themes namely; My Family (Std 1), My Classroom (Std 2), My School (Std 3) My Library (Std 4) and Parts of Speech (Std 5).

Please click on the following pictures to view the details of the work done by AVM Wonders. 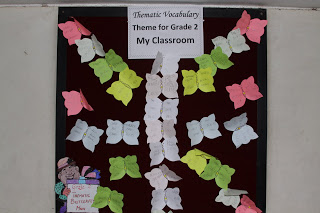 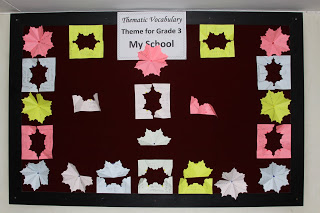 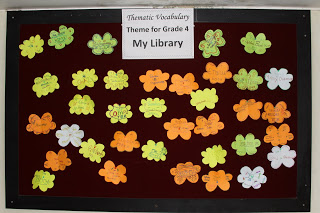 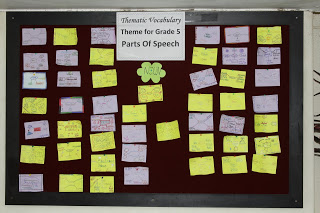 All the students were given colourful papers of attractive shapes. They were asked to write words related to the given theme in those papers and stick on the respective display boards. All the students participated in the activity with a great spirit. The students were allowed to make errors and learn from them. We would rather say the boards were full of efforts of little “bhoolkus” of Std.1st to 5th. Of course, Renuka Madam and Ruma Madam were the teachers behind the scene. They boosted their enthusiasm.

All the participants were highly appreciated in the morning assembly for their active participation. It is rightly said that any learning coupled with fun and play is always accepted wholeheartedly.

https://www.avm.edu.in/wp-content/uploads/2011/07/Std1-My-Family.jpg 213 320 AVM Teachers http://www.avm.edu.in/wp-content/uploads/2015/11/avm-header_10.png AVM Teachers2011-07-18 08:19:002015-05-25 00:15:26Thematic Display Board Activity
Recently students of Std IX A were taught a nature poem written by Alfred Tennyson where he personified a river named Brook. Our students used personification in their poems trying to go parallel with Tennyson.
Here are some compositions by the budding poets of Atmiya Vidya Mandir:
Pencil
Among school children I got my fame,
Natraj is my family and extra black is my name.
I am born to serve,
Till last with all my curve.
I play with pages and papers,
With sharpeners and erasers.
With funny face that they made,
More they write, more I fade.

Now small and short is my look,
With that black colour I took.
I think my owner is cool,
As he tossed me as a fool.

I shed my skin everyday,
To give my best day by day.
Bob’s pen-stand is my beautiful home,
Living here take a still-form.

I am shorty smart I say,
And slim and fit in every way.
Bob keeps me in his hand,
Because I am a big magic wand.

I take birth from a tree,
And all that they get me for free.
People took me for granted ,
And threw me wherever they wanted.

People used me to fulfill their will,
And took me to that paper mill.
Man uses me in any way,
I am better than a plastic they say.

I swirl, I twirl, I twist, I turn
As fast as a rocket when I run.
Hurting air is my hobby,
But I am never in the lobby.

I nick, I gash, I snip, I tear,
The cool air whose cry I hear.
My favorite dish is electricity,
Which is only found in the city. 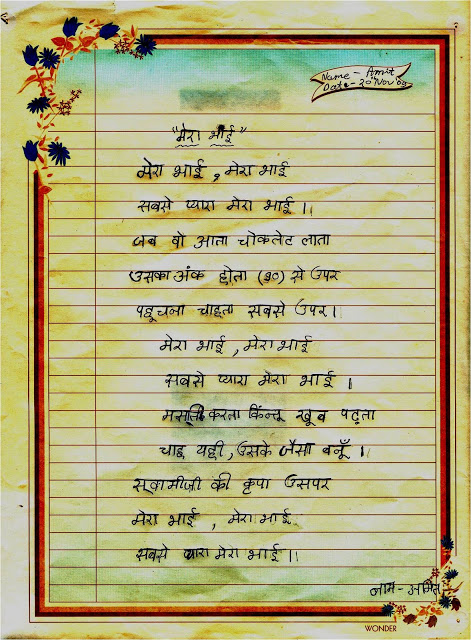 Please click on the images below to have an enlarged view.

A HOTS (High Order Thinking Skills) activity was conducted in Std IV. It was a Poster Making Competition. The topic for the competition was – “Let’s make OUR EARTH a better place to live on.”

The students had to make their posters in a period of 40 minutes.

They came up with excellent ideas. Though they are very young, they were able to picturise their imagination and conveyed their messages with excellence. 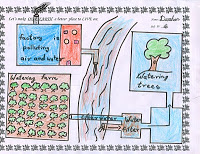 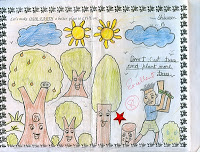 Joining hands to promote awareness regarding safeguarding our heritage monuments and sites, the students and teachers of Atmiya Vidya Mandir pledged to contribute in a collaborative way towards this concern by being a part of the ongoing global campaign.

Together, the family of AVM created posters that boasted some effective suggestions to conserve and preserve such natural as well as architectural land marvels. Adopting “Valley of flowers” Standard X suggested that more documentaries should be shown in order to generate awareness a view that was corroborated by others to regarding preserving the glory of Victoria Terminus, Sanchi Stupa, Temple of Hampi and Ajanta and Ellora Caves.

Suggestion regarding inclusion of projects on such sites in the school curriculum and other such measures that will help spread awareness was widely accepted.

The wide range of suggestions that flooded this ‘creation of awareness program’ shows a genuine concern on part of AVM towards preserving and conserving our extraordinary rich heritage.
Written By: Rupashree Madam
http://www.avm.edu.in/wp-content/uploads/2015/11/avm-header_10.png 0 0 AVM Teachers http://www.avm.edu.in/wp-content/uploads/2015/11/avm-header_10.png AVM Teachers2011-01-12 06:38:002015-05-25 00:15:28Celebration of Heritage Day
http://www.avm.edu.in/wp-content/uploads/2015/11/avm-header_10.png 0 0 AVM Teachers http://www.avm.edu.in/wp-content/uploads/2015/11/avm-header_10.png AVM Teachers2010-08-21 11:36:002015-05-25 00:15:28Students’ Photography
The Merchant of Venice is classified as an early Shakespearean comedy, more specifically, as a “Christian comedy” and it is a work in which good triumphs over evil.
For Grade XI – Science and Commerce, the new academic year began by performing this most appreciated and loved play of William Shakespeare – The Merchant of Venice. It was a great learning experience for all the students of Grade XI. Right from the time the play was introduced, read, analysed and understood there was no end to their excitement. Each and every student of XI – Science and Commerce appealed to let them stage the play.
Everything was professionally planned and the work began. They named themselves professionally as “All-Star Production”. The Directors, Co-directors, Editors, Costume Designers, and Music Director were appointed. Then started the audition for the casts of the play. After taking the audition the following were selected as the casts of the play:
Antonio – Kishan Viradia
Bassanio – Bhadra N. Parikh
Portia – Atmiya K. Patel
Shylock – Jay Tailor
Gratiano – Siddharth Shah
Lorenzo – Sarveshwar Viroja
Nerissa – Roneet Chaudhary
Jessica – Kishan A. Patel
The Prince of Morroco – Anand V. Patel
Tubal – Harsh Patel
Salarion & Saliano – Hitesh Yadav & Mitul Patel
Servants – Ashish Pandey & Dipen Reshamwala
Dukes of Venice – Sarthak Jariwala, Karan Patel, Mihirbhai
Lawyer – Rushi Patel
Doctor Balthasar – Atmiya K. Patel
Director – Sarthak Jariwala
Co-Director – Kishan A. Patel
Narrator – Mantavya Patel
Music Director – Abhishek Rathore
Costume Designers – Robin Patel & Suharadam Nayak Sir
Property Managers – Krunal Vakil, Gavravbhai, Atmiya Kalavadia, Robin Patel, Ravi Patel
Students learnt many things apart from relishing the Shakespearean English. For example,
1. Friendship requires sacrifice. Antonio risks his fortune–and later his life–to help Bassanio win Portia.
2. Appearances are deceiving. Neither the gold nor the silver casket contains the key to winning Portia. Instead, it is the plain lead casket. Shakespeare expresses this theme–appearances are deceiving–in a message inside the golden casket. It says, “All that glisters [glitters] is not gold”.
3. Revenge ultimately destroys its perpetrator. Shylock seeks revenge against his enemies, but it is he who suffers the downfall after Christians unite to trick him. Perhaps he would have had more success if he had pursued justice instead of revenge.
4. Jews suffer bigotry and other forms of mistreatment because of their religion and race. Christians alienate Shylock simply because he is a Jew. In ancient, medieval, and Renaissance times, Jews almost always encountered prejudice from non-Jews around them. (Helped in enhancing students’ knowledge of the rivalry between the Jews and the Christian)
5. Women can be just as competent as men, maybe even more so. Portia, disguised as a man, speaks eloquently in defense of Antonio and persuades the Duke of Venice to rule in Antonio’s favor.
Moreover, they learnt that the real evil in The Merchant of Venice was the corrupt value system of the principal Christian characters who are, of course, representative of people in Shakespeare’s time.
After all the learning, analysis, preparation and rehearsal, the play was professionally staged on 27th July, 2010 in the Auditorium of the school in front of the students of Grade VIII, IX & X and all the Teachers, the Principal, the Housemasters and the Hostel In-charges.
The best thing about performing “The Merchant of Venice” was that each and every student of Grade XI participated wholeheartedly in one or the other roles. They enjoyed every moment of it right from the introduction of the play till its final performance on the stage.
Hopefully, everybody enjoyed the play to their heart’s content.
Written by: Paras Sir
http://www.avm.edu.in/wp-content/uploads/2015/11/avm-header_10.png 0 0 AVM Teachers http://www.avm.edu.in/wp-content/uploads/2015/11/avm-header_10.png AVM Teachers2010-08-19 09:09:002015-05-25 00:15:28The Merchant of Venice of William Shakespeare By “All-Star Production” 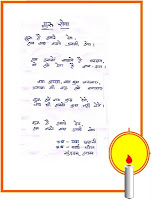 Teacher and Me by Ronak Mistry

My Teacher – Aakash and Akshay 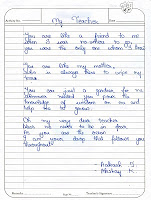 O My Teacher I bow to you by Kenny and Bhavik

Teacher and Student by Pratipal and Harshit

Teacher and Student by Samay Jain and Aditya Killa 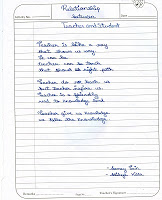 Valuable gem of my life by Satyam, Parikshit and Manan

You are the one my teacher – Tanmay and Dhruv